Menu
William Smith just 4 years old rode an incredible 13.29 miles on his bike to raise £300 for Cransley Hospice in memory of close family and friends.

Before the lockdown, William Smith wasn’t particularly bothered about learning to ride his bike and liked to run everywhere. However, after much encouragement and persuasion in May his Daddy Dan finally got young William cycling independently on his special “Bradley Wiggins” bike. 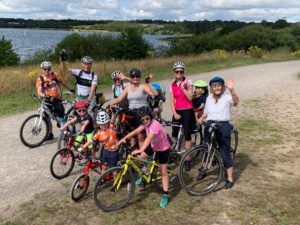 It was William’s Grandma, Liz Adcock, who signed him up for the Cransley Hospice BIG Cycle when she received the email from us.  With encouragement from his family, William smashed an incredible 13.29 miles in total over two days.  He had the full support of the family; Mummy and Grandma riding 10 miles and Grandad Bill and Daddy cycling 30 miles on the day, everyone encouraged him along the way, giving him chocolate to boost his energy when he needed.  The ride was not without its trials, but he kept going!

Lisa Smith, William’s Mummy said: “He hadn’t even ridden up hills before, but the whole family rallied and encouraged him.  Once he got going he was off!”

Louise Preedy, Cransley Hospice Community Fundraising Manager said: “We were so impressed by his achievement that we sent him a special Cransley Hospice cycling jersey which unsurprisingly is a little on the large side.”  “Thank you to William and everyone that took part!  Although we had to adapt the Cransley Cycle because of the Covid-19 restrictions the response has been beyond our expectations.  We even had supporters joining us from as far away as Shanghai! We’re already looking to continue the virtual element at next year’s cycle event.” 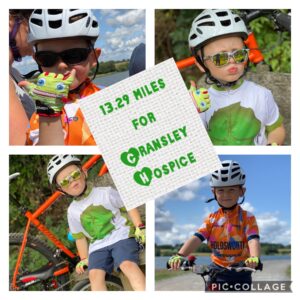 Cransley Hospice has remained open throughout the pandemic and support from the community has been more important than ever, enabling the hospice to continue to provide the outstanding level of specialist palliative care and support for patients and their families.