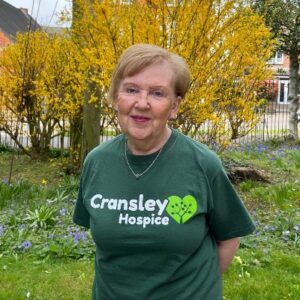 Pamela Humphrey a fundraising volunteer at Cransley Hospice Trust for many years has been recognised for her dedication and commitment by winning the prestigious Volunteer of the Year Award at The Towergate Care Awards event hosted at The Dorchester Hotel in London.
Pam’s award was presented by TV and West End star Denise Van Outen. 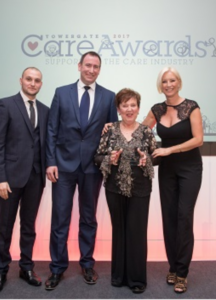 Pam was nominated based on her work for various organisations, but mostly her volunteering and fundraising efforts for Cransley Hospice Trust. She has been instrumental in creating and directing the now very popular Sing for Cransley event, which has to date raised over £15,000 to support end of life care in north Northamptonshire.

In addition to this, Pam regularly gives presentation talks on the work of the hospice aimed at raising awareness of the need to generate significant funds to support patients and their families at a very difficult time in their lives.

She volunteers in the fundraising office and can also be spotted at numerous other events offering help where it’s needed!

“We are absolutely delighted that Pam’s hard work and commitment to Cransley Hospice Trust has been recognised by her winning this award. Pam was in a very strong category with many other worthy candidates from various charities who were all nominated. Pam was shortlisted to the final three and we were thrilled for Pam when she was announced as the winner!

“At Cransley Hospice Trust we really value the contribution of all of our volunteers, but on this occasion, we are particularly proud of what Pam has achieved. She richly deserves this award”