Menu
She’s an inspiration to us all - Alex Fisher shares the circumstances and motivation that prompted her to sign up and get fit for the trek of a lifetime after her beloved Mum, Marion Hind passed away at Cransley Hospice.

Alex’s Mum, Marion Hind had been diagnosed with endometrial cancer in 2016.  Marion underwent surgery and radiation, and for a while she was ok.  But, sadly after a second diagnosis, they got the devastating news that the cancer was terminal. Marion’s health deteriorated quickly and she was admitted to Kettering General Hospital for a short time before she was moved to Cransley Hospice where she could be more comfortable.

It was whilst Alex was in the waiting room at Cransley Hospice that she first spotted the article about a Trek to the Great Wall of China.  Alex and her Mum had shared many happy memories of trips and holidays they had taken together after her Dad had died.  They chatted about the happy times and Alex sensed the regret from her Mum that she wouldn’t get the chance to explore all the places she had wanted to travel to.

When Alex got home that night she was randomly checking her online banking.  There was £400 more in her account than expected – her lovely Mum had paid the China Trek deposit into her account.  Without hesitation, Alex signed up there and then!

Alex had 1 year to fundraise and get fit.  “I hadn’t done this before and wasn’t sure how I was going to get people to donate to my cause – especially as I lived in Cambridge where people were unlikely to have heard of Cransley Hospice.  I decided the best way to do this was to write my story down and email it to all my friends and colleagues.  The response blew me away.  Friends shared my story and I received donations from people I didn’t even know. 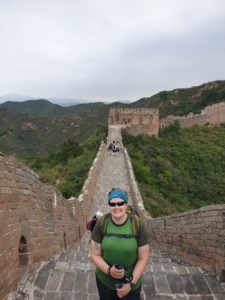 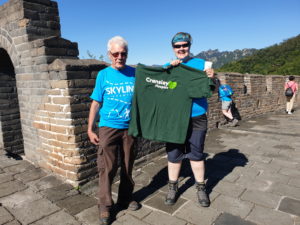 “I had a year to get fit!”  The Great Wall of China voted one of the New Seven Wonders of the World, snakes its way across mountains and through valleys.  “Living in Cambridge, one of the flattest counties in Britain was not ideal training terrain.” Alex didn’t let it stop her.

“I joined a gym, bought new walking boots and booked two trips, one to the Lakes and one to the Peak District to get some hill practise and wear my boots in.  I knew it was going to be hard to replicate the uneven, slippery and often crumbly terrain of the Wall, but I was determined to give it my best.

“I had many doubts – would I be fit enough?  Would I be able to cope with the extreme hills? Would I get on with the rest of the group? I’m a very sociable person, but I also like my own space!

“I need not have worried!  Everyone in the group was amazing.  Although I had prepared well physically, I hadn’t really prepared myself emotionally.  Most of us were there for similar reasons and had recently lost someone very close.  Our tour leaders were brilliant.  They were very experienced and knew exactly when to lighten the mood if things got too melancholy, when to help us out and went to give us space.  Day 2’s climb of the mountain was particularly tricky, both physically and emotionally.  The scenery was otherworldly, incredibly humbling and unforgettable.  As we trekked we shared our stories, creating a solid bond between us. We helped each other, pulled together, and got through it and almost unexpectedly making friendships for life by the end of it.

“Our final day in Beijing, we had a meal out and a few drinks and made it back to the Hotel by 5 am – I didn’t know I still had it in me!  A feeling of pride that I had made it, sadness that it was over but I was so happy to have done it with such a great group of friends.  The whole trip had been amazing. We were made to feel so welcome, the food was delicious, and I haven’t had a Chinese takeaway since!

“Doing it for Cransley really helped me.  The care the wonderful nurses gave my Mum was so amazing. I now have a charity that will always be close to my heart.

“Anyone thinking of doing something like this – put your fears aside and just do it!  It’s a brilliant way to heal.  I’m looking forward to a reunion with the group in a few months’ time and three of us have booked our next trek already.

Alex’s trek was put on hold this year, but she’s transferred and now looking forward to doing two treks in 2021!